Want to be on the blog?
Email me! Get in touch at msb11ds1@mail.wbs.ac.uk

About the Blog:
London is becoming one of the world's best cities for coffee. With new coffee shops opening left and right, there's never been a better time to learn more about a bean that's directed much of world history since the 18th century.

This blog is an attempt to help you find local spots, keep you up to date with events hosted at coffee shops and help you avoid high-street chains when local independents can offer so much more.

Do you Review Shops? 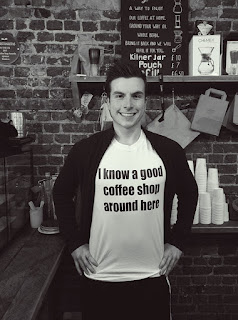 No. If I have a bad experience with a coffee shop (eg. terrible coffee) I simply don't put them up on the site. Coffee shops are so subjective and there is such a variety that reviewing them is an impossible task.

Why Would You Possibly Do This??!!
Because it makes me happy. Seriously. I have loads of fun finding new additions to put on the map.

About Daniel (@dc_stevens): I'm a Brazilian with an American accent who's also lived in Austria. I studied at the University of Warwick before becoming President of the Students' Union there. I moved down to London in 2012 when I was elected to a Sabbatical position with the National Union of Students. I've been exploring London's coffee shops ever since. I now work in Public Affairs, the blog is done on the side as a hobby. No money is made from the map or site, only caffeine-fueled lack of sleep.