Bring on the Coffee and …. Bourbon?

Anyone who’s ever met Ed and Henry, the dapperly dressed minds behind the Gentlemen Baristas on Union Street, know they’re not one for the ordinary. Rumours were flying when their shop near London Bridge suddenly was well-stocked with a plentiful supply of Bulleit Bourbon.

Many of us wrote it off as just their personal supply. Running a new coffee shop is hard work and no one would hold a propensity to wind down with whiskey against them. Turns out, as some of us discovered yesterday, they weren’t just drinking it, they were up to something far more interesting too. 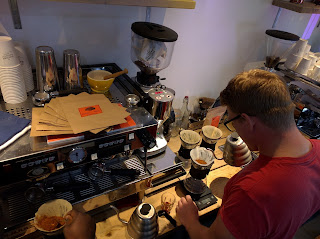 The GBs and Bulleit Bourbon have partnered to produce two limited edition coffee varieties which have been rested in Bulleit Bourbon casks for 14 days. One filter “The Gatbsy” from Colombia and another Espresso “The Trucker” from El Salvador.

Roasted by the legendary Dumo Mathema of The Roastery Department Fame, the Colombian filter I had was pretty incredible. We tried both the filter without the bourbon-cask finish and with it. Dumo has still managed to keep the delicacy needed for a filter, the difference is in the finish, with the Bourbon providing a refreshing spice. 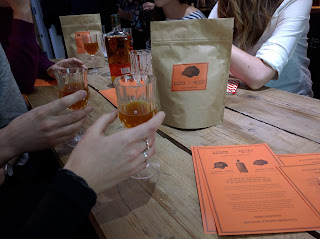 I was pleasantly surprised by the taste, it’s a filter I would happily have again and would love to see this used as a guest in some coffee shops. It was also great to see filter used to form the base of a cocktail. Bulleit brand ambassador Andrea also served an incredibly smooth cocktail using the filter as a base, adding in Bulleit whiskey, roasted coconut and a variety of spices.
Newer Post Older Post Home
Tweets by @100CupsCoffee