London’s speciality coffee scene is expanding at an unprecedented scale. In the past twelve months over £6 million has been raised in capital to fuel the expansion of four coffee shops alone. But which are the largest independent coffee shops in London? Well, numbers were crunched and these were found to be the biggest by the number of venues (Note, this includes coffee carts):

The Department of Coffee and Social Affairs, Notes and Taylor St currently serve coffee from eight locations each (although if we are to be technical- one from Department is based in an office and three from Notes are coffee carts.) 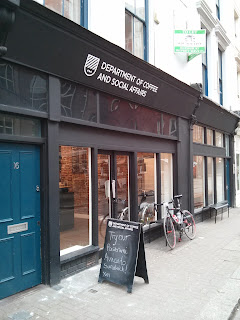 The Department of Coffee and Social Affairs first café opened in Leather Lane in 2010 and has since slowly expanded across Central London. In a shakeup, its rebranded all of its outlets under the original Department theme (although their shops still retain their unique styles). It’s invested heavily in its business recently, switching from using coffee roasted by the Tate, to roasting their own by talented head roaster Dumo Mathema. 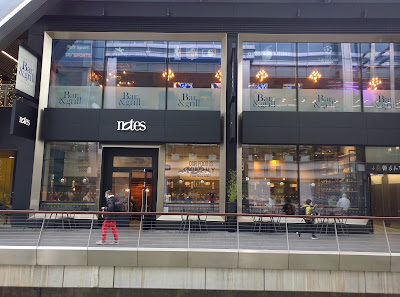 Notes, originally based in Trafalgar Square, opened in 2010. In 2013 it switched to roasting its own coffee and this year relocated its roastery to outside Canary Wharf. It has opened in the space of 12 months new venues in King’s Cross, Moorgate, and two locations in Canary Wharf. This year, it raised over £900,000 on crowdcube to “open new locations and grow [its] coffee roaster.” 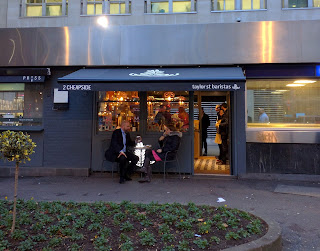 The story of Taylor St is more well known. It was founded by three siblings in 2006 and has since gone on to 8 locations (although it recently closed its Brighton branch to focus on operations in London). In 2012, it launched a partnership with Tesco to form Harris + Hoole which has around 10 locations in London (four centrally). Taylor Street wants to expand its operation in the capital, raising over £1.8 million in January to “double the size of its business” over the next two years. Like Department and Notes, Taylor St has started roasting its own coffee as well.

Implications
What does this tell us about the state of the London Coffee scene? The larger coffee shops are looking to expand and there doesn’t seem to be any shortage of capital. Four coffee shops have collectively raised almost £6m in expansion capital in less than 12 months. Beany Green, Notes and London Grind have all raised almost £1m each and Taylor St has raised £1.8m. One does wonder about James Hoffman’s worry and predictions about a bubble.

That said, collective market share pales in comparison to the number of real chains. In 2014, there were 246 Starbucks in London, mostly in affluent areas with 119 in Zone one, mostly. Looking at where the big three are located, it’s a fair assessment to suggest they are targeting the same audience and might be chipping away at their customer base.

The successful business models these shops operate are complex and speciality coffee is sometimes only a small factor. Notes is well known for its selection of wines and switches operations in the evening (similarly Fernandez and Wells). Taylor St is building customers through extremely competitive loyalty cards and is based in areas with a high office density. London Grind’s venues all double as cocktail bars, likewise with some of Beany Green’s.

For all location is key, with white collar office workers being the target market, often for those who look to schedule external meetings. Larger coffee shops are developing control of their own supply chain by switching to roasting their own coffee in a bid to control quality and reduce costs. This is part of a wider trend in London of successful speciality coffee shops wanting to roast their own coffee, but the investments being made and scale of the operation by larger shops is discernibly greater.

The other takeaway is that the speciality coffee shop as we often stereotype it, minimalist, antipodean and with a focus purely on coffee, is not expanding rapidly. Many of the coffee shops listed here only offer espresso-based drinks. This supports a hypothesis I have about the London coffee scene, the market for speciality coffee is not growing relatively quick- the market towards the higher end of café culture is.


How their expansion will impact on the speciality coffee scene we’re still yet to see, but regardless- London is set to see the scene only continue to grow in 2016.
Newer Post Older Post Home
Tweets by @100CupsCoffee